Desert Oasis with a Tranquil Setting! 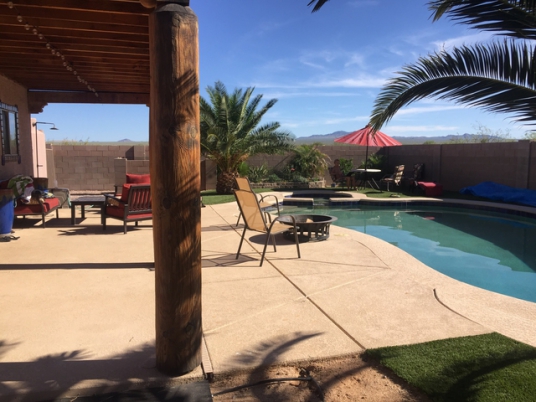 Situated at the edge the Sonoran Desert, Desert Joy has been updated and improved to provide guests a very comfortable and quality nudist experience! The huge diving pool and outdoor living areas are peaceful and relaxing as you are nestled at the edge of the Sonoran Desert with Mt. Kitt in the background! With 2 guest rooms, each with a private bath, and a convenient Guest Den...you have a very private, comfortable and secure place to enjoy the sunshine...naturally!

Your hosts are interesting and well-traveled.  He is a pilot with his own small airplane and she is a published mystery novelist! Hiking, kayaking, camping and love of the outdoors is a passion. They enjoy traveling to all types of destinations and decided opening their home to guests was a perfect fit for them.  They have taken great care to provide a private and secure place for their guests where they can feel like they are at home when visiting. Their friendly, and extremely well trained, Weimeraner adds to the feeling of being home.

Discounts available for 4+ or 7+ night stays.  Additional discount if both rooms are booked at the same time.

Clothing Optional - We realize our guests want choices and that is why we are clothing optional.  Our philosophy is based on common sense.  If it is cool in the evening, you are welcome to wear clothes.  You have the freedom to wear a shirt, cover-up or robe at any time.  You have the option to wear something when you eat a meal.  If this is your first time at a clothing optional resort, you may wear something until you are more comfortable.  Experienced Nudists are also very happy because they can be nude 100% of the time. 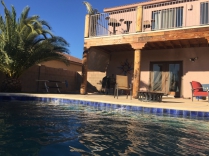 Private solar heated diving pool is huge and perfect for floating in the sunshine, practicing your diving skills or just relaxing next to it in the shade because around the pool are lounge chairs and market umbrellas so you can enjoy the sun or shade.

The Upstairs Deck provides 180 degree views of the sunset, distant mountains and the fabulous nighttime stars.

Wi-Fi and mobile phone service throughout the property.

Romantic Firepit with comfy sofas to enjoy in the evenings.

Outdoor shower is next to the pool.

Poolside Hot Tub is perfect for relaxing and nightime stargazing.

Massage Services available onsite...inside, outside, under the moon or in the sunshine! Please schedule in advance of stay. 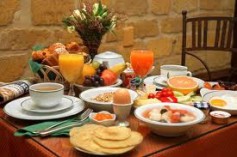 Your Hosts will prepare a hot breakfast each morning, usually served by the pool.  There is no set time, you tell us when you'd like breakfast and we'll have it ready for you!!  We brew fresh premium coffee daily and serve healty portions to start your day off right!

Some Guest Favorites Include:

*Let us know ahead of time if you have any dietary restrictions, allergies, food preferences, etc. so that every breakfast will be to your liking!

Breakfast is the only meal provided, so you are welcome to bring in food and beverage items for use during your stay.  Your Host may have some afternoon snacks or a glass of wine for you to start your evening.

Spacious and comfortable, the Ocotillo Suite features a private ensuite bath, 300+ thread count Egyptian cotton sheets, fluffy pillows, ceiling fan, closet, wireless internet access and views of the desert.  All designed to give you a calm and relaxing stay.

The desert inspired Saguaro Room is furnished with 300+ thread count Egyptian cotton sheets, fluffy pillows, chair, nightstand, ceiling fan, large closet, wireless internet access and views of the desert.  All designed to give you a calm and relaxing stay.

Tucson Attractions.  Video of all that Tucson has to offer!

Biosphere 2 Center Silhouetted against the peaks and ridges of the majestic Santa Catalina Mountains, The Biosphere 2 Center is a $200 million facility on 250 acres of beautiful desert. A guided tour of the Biosphere lasts about an hour and a half and features science exhibits and a look under the glass at the upper and lower grasslands, ocean, and much more.

Mt. Lemmon Each night our galactic Neighbor, the Andromeda Galaxy, is shown as part of the SkyNight experience. Through the 0.8m Schulman telescope, the largest dedicated public telescope in the southwest, you can easily see the dust lanes that wrap around the center of galaxy!

DeGrazia Gallery in the Sun DeGrazia received worldwide acclaim during his lifetime career for his colorful paintings of native cultures in the Sonoran desert. Using traditional adobe bricks crafted on-site, DeGrazia built the Gallery in the Sun in 1965 to exhibit his originals in a museum setting.

Titan Missile Museum The only ICBM site in the world with a Titan II missile in the launch silo, this complexprovides both above ground and underground exhibits depicting the Cold War era.

Bisbee Mining & Historical Museum With a history deserving of National Landmark status, it’s only fitting that Bisbee’s coppermining heritage be captured and reflected in a museum like no other.

Kartchner Caverns State Park Experience a stunning limestone cave in  Southeastern Arizona that boasts world-class features. This “live” cave, discovered in 1974, is host to a wide variety of unique minerals and formations.

Sabino Canyon Rec. Center  Sabino Canyon Recreation Area is one of Tucson ‘s natural treasures. Fed by the waters of Sabino Creek and sheltered by the canyon walls, the plants and animals that inhabit the canyon offer an interesting contrast to those found in the surrounding desert. The shade and cool water attract visitors year-round.

Tubac Tubac is said to have “good light” attracting some of the world’s finest artists to this small art community at the base of the Santa Rita Mountains in Southern, Arizona. At home with the traditions of their ancestors here artists explore and work in all medium’s from traditional to contemporary. With over 100 galleries, Tubac is home to the internationally acclaimed and longest running annual art gathering in the United States, The Festival of the Arts.

Pima Air and Space Museum  Pima Air & Space Museum, where history takes flight, is one of the largest air and space museums in the world, and the largest non-government funded aviation museum. You’ll see more than 300 aircraft and spacecraft including many of the most historically significant and technically advanced craft ever produced, both from the United States and throughout the
world.

O.K. Corral  The actual site of Tombstone’s legendary Gunfight at the O.K. Corral®–the subject of numerous Hollywood movies. See Wyatt Earp and “Doc” Holliday in daily reenactments of the historic gun battle that made Tombstone famous.

Gem Show  The JOGS Tucson Gem and Mineral Show is one of the U.S. best selling events year after year – and one of the top markets in the country. This exciting gem and jewelry show event draws buyers from all over the world – tens of thousands of qualified buyers worth millions with serious purchasing intent.

Casino Del Sol  A short 4 miles away, it has the nearest reastaurant and one of the top golf courses in Tucson...Sewailo.

Interested in finding out how you can set up your own C/O B&B style home?  Click here for information.

Be sure to
check our Specials Page